Kangana Ranaut reacted to Rohit Sharma's tweet and called cricketers 'dhobi ka kutta'. Her post was deleted by Twitter and she later threatened the company by calling it a 'China puppet.'

Actor Kangana Ranaut has her own ways to make the world sit up and notice her antics. After Twitter deleted her tweet made for cricketer Rohit Sharma on Thursday, the actor made another post threatening Twitter itself. In her tweet made on Thursday evening, the Queen actor claimed that Twitter is trying to suspend her account for her tweets made on Farmers’ Protest. She ended up ‘warning’ Twitter that if she goes downhill from here, she will be taking them along. Also Read - Taapsee Pannu Takes Sarcastic Dig At Kangana Ranaut, Says 'It's In Her DNA To Be Toxic Or Abusive'

China puppet twitter is threatening to suspend my account even though I did not violate any rules, remember jis din main jaungi tumko saath lekar jaungi, just like Chinese tik tok you will be banned as well @jack #ConspiracyAgainstlndia Also Read - Kangana Ranaut Gets Trolled For Calling Rihanna a 'Fool' in a Tweet Over Farmers' Protests

Kangana’s tweet comes two days after she emerged as one of the first people to initiate a mass outrage over international pop star Rihanna’s comment on the farmers’ protest. When on Wednesday, many celebrities took to Twitter to post about the ‘propaganda’ and how all should be ‘together’ in these times, cricketer Rohit Sharma also tweeted to say, “India has always been stronger when we all stand together and finding a solution is the need of the hour. Our farmers play an important role in our nation’s well-being and I am sure everyone will play their roles to find a solution TOGETHER. #IndiaTogether.” (sic)

However, Rohit’s tweet irked Kangana who went on to call out the cricketer and others who, as per her tweet, ‘sounded like a dog’. Kangana’s tweet that now stands deleted read, “Why all these cricketers sounding like dhobi ka kutta na ghar ka na ghat ka, why would farmers be against laws which are revolutionary for their well being. These are terrorists who are causing ruckus… say that na itna darr lagta hai?” (sic) 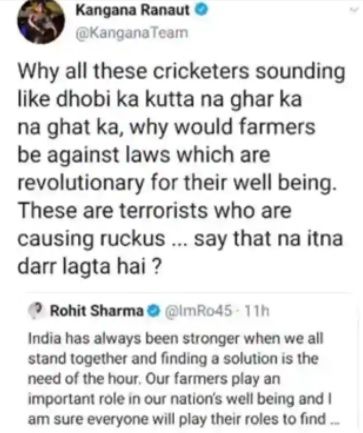 Speaking to NDTV about deleting Kangana’s tweet, a Twitter official said, “We take action on any account that violates the Twitter Rules. We welcome people to freely express themselves on our service, however as outlined in our Abusive Behaviour Policy, you may not engage in the targeted harassment of someone, or incite other people to do so”.

Kangana has been facing the ire of many social media users for calling out Rihanna when she rattled the whole world by diverting everyone’s attention to the farmers’ protest in India by asking ‘why are we not talking about this’ and sharing a CNN report about the internet ban in various parts of Delhi and Haryana. The Manikarnika actor continues to write on Twitter.